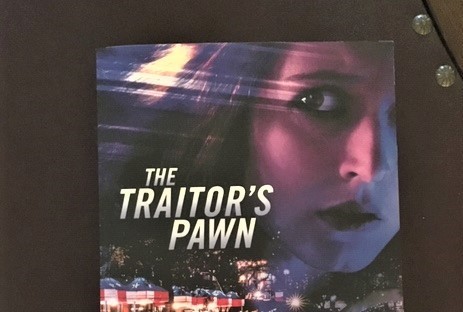 Today, I finished reading The Traitor’s Pawn, by Lisa Harris. This romantic suspense novel was action-packed! The story takes place in Texas and follows two people. The first is Aubrey Grayson, a strong-willed detective who finds herself in the middle of an investigation that’s confusing to say the least. From target, to victim, to investigator, she is wrapped up in a criminal plot that hits her emotionally, especially when she finds out that her estranged father is wanted by the FBI.

The second person is FBI special agent Jack Shannon. When he arrives in Corpus Christi, he finds out that a senator has been shot and his childhood best friend—Aubrey—was kidnapped. It isn’t long before Jack realizes that the abduction may be connected to an FBI case he’s working. Now, with Aubrey involved, he finds himself working alongside the friend he once loved. Can he protect her and not lose his heart in the process?

Although the premise was interesting, I wasn’t very invested in the characters or engaged early on. It might have had something to do with the fast pace and not yet knowing Aubrey and Jack very well. I became much more interested as I got to know the characters better, as suspects were introduced, and as certain aspects of the case became clearer.

Overall, I enjoyed this book. Lisa Harris is certainly a talented writer. She did a good job of creating a complex case and a plot packed with surprises. The romance was also nicely integrated. It didn’t seem to be overbearing or distracting, but skillfully woven into the storyline.

If you like fast-paced, clean, romantic suspense involving investigative work, then The Traitor’s Pawn may be right up your alley. A mysterious shooting, kidnapping, secrets, and spies: fasten your seat belt for this ride. 🙂

**I was given a free copy in exchange for an honest review.**